The latest edition of the Global Initiative Against Transnational Organised Crime's East and Southern Africa Risk Bulletin examines gangs and politics in Kenya, gold heists in South Africa, growing markets for synthetic cannabinoids in Mauritius, Mayotte, and Comoros, among other issues.

The first story, looking at the way gangs are deployed to influence election campaigns in Kenya, investigates how organized crime can play a role in the degradation of democracy and urban governance.

In South Africa, we look at the alarming phenomenon of heists carried out at gold-smelting facilities, in which armed gangs – well equipped and seemingly with some level of military training – strategically target gold and gold-bearing material. The seemingly connected trends between gold heists, cash-in-transit heists and bank robberies may be indicative of these criminal groups adapting and shifting their key target, illustrating the adaptability of organised crime groups to respond to new developments and situations.

Our investigation of the rapidly growing market in synthetic cannabinoids (types of new psychoactive substances) in Mauritius, Mayotte and Comoros likewise illustrates the adaptability of organised crime groups and illicit markets. This nascent drug market had significant public-health impacts, and presents very different challenges to law enforcement than longer-standing markets in the islands such as the heroin trade.

We then turn from drugs markets and urban governance to governance of the seas. The introduction of private maritime security companies in  the Western Indian Ocean, originally as a response to Somali piracy, fundamentally shifted the role of private military operations at sea. We look at how this market has developed, including allegations of poor safety standards and insufficient regulation of some operators. This story illustrates the long-lasting impacts which responses to organised crime can have on security dynamics and other sectors of the economy. 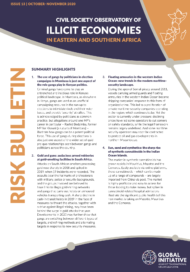